My Man Crush on Sean Bean

Man Crush – A man who has a crush on another man without sexual attraction.

Notwithstanding the subject misplacement in that definition (a man can’t be a man crush), a man crush is a real thing. I know, because I’ve had one on the English actor Sean Bean for ages. It can lie dormant for a year or two at a time, but then I’ll see a trailer for a show or a movie featuring the hardworking thespian, and I’ll be like, “Damn. That Sean Bean has got it goin’ on.”

Like in this new TNT show, Legends, which I now have to watch:

The good thing about a man crush vs. a real crush is that there’s no anxiety and you don’t lose sleep over it. You can’t be rejected, either, because it’s not like you’re going to ask the guy out. Sean Bean won’t take my calls anyway (jerk), but the point is, having the man crush is the end in itself.

Man crushes are also fun because they freak out homophobes and those vehemently anti-gay folks who secretly wrestle with feelings they want desperately to repress. The latter usually open gay-conversion clinics and other such silly institutions, and they tend to add a lot of noise to otherwise intelligent conversations. 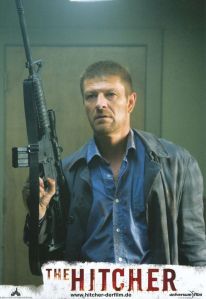 If you are a man and think you might want to share my man crush (another great aspect: no jealousy. The more the merrier. It’s like polyamory where no one touches anybody), check out Sean Bean in HBO’s Game of Thrones, the suspense thriller/remake The Hitcher, the first Lord of the Rings movie, Fellowship of the Ring, or as the villain in the James Bond flick Goldeneye.

Note: Man crushes should not be confused with “bromances,” in which two or more dudes are really close and hang out together all the time but are not romantically or sexually attracted to each other. I tried to explain the difference to a gay friend once, and he said, “I don’t know. I just went out and got myself a boyfriend. It’s less complicated.”

So guys, who’s your man crush? Ladies, have you got a lady crush you’re willing to admit to? Gay and lesbian readers, have you ever had a non-romantic crush on a member of the other sex? It can happen! Another gay friend told once described his other-sex crush on Kirsten Dunst. For reals.