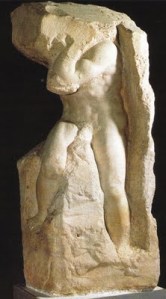 A message from me: Today I join the already swollen ranks of those who dispense writing advice in the blogosphere. If, through my sage words, you become a bestselling author, you owe me money and will be hearing from my lawyer.

Writers often hear the word “voice” used to describe one’s writing style, but those new to the craft may wonder what that means and where to get one. The wonderful news is that you already have a writing voice! You just have to move some junk out of the way to find it. Like Michelangelo freeing his figures from their marble prisons, the writer has to free her voice.

I continue to get at my writing voice four ways, and I think they will work for you. The obvious, ongoing method is practice. Write. Write. Write. I know everyone says that, but they also say, “Don’t run with a knife in your hand.” That is never bad advice, and neither is write, write, write, because you will master the mechanics of writing and allow your voice to show through. Like playing guitar or building life-sized Star Wars vehicles out of Lego bricks, you inevitably get better by doing (though one of these will get you laid and the other typically has the opposite effect).

Another facet of finding your voice (besides avoiding weak metaphors like that one) is to be Zen. Since I am too wired to be Zen, I just try to relax. In my days as a performing musician, my best shows happened when I was relaxed, centered, and in the moment. I did not think about what song was next, or who was in the crowd, or the difficult passage I was about to play. In other words, try not to think. Find your inner Malcolm Gladwell and go with your gut.

Your gut is where your writing voice is hanging out most of the time.

You also need an editor who knows writing. Maybe the idea of someone rooting around in your gut is unsettling, but you need that person who is willing to say, “This ending sucks,” or “This section belongs in a different story.” I have more than one editor, and my pieces are always better for their suggestions and insults, especially in regard to tonal consistency. A crucial component of “voice” is maintaining the right tone. Michelangelo didn’t give his David a clown nose, did he?

As you seek an editor, note that your mother is not a candidate. My mom is a great proofreader, but she’ll never criticize my work, and it usually needs criticism. On this point, I encourage you to edit a fellow writer’s work as well. You may recognize some of the mistakes you are making but have not been able to see.

My last suggestion, particularly for new writers, is to avoid trying to sound “writerly.” If you have not yet hammered out the mechanics of composition, keep it simple until you do. If you have to write, “My hamster and I went to the pet store to buy a miniature badminton set for the rodent beach party,” say it just like that. Steinbeck would not have written, “It was thereupon decided that we were to travel to the pet store, from which a miniature badminton set was to be purchased, thus enlivening the rodent beach party.” And neither should you.

I edit for a living, and, in doing so, I’ve seen a person’s death described as “his deathly demise,” and I frequently come across constructions like, “he was a person who showed a friendly personality,” instead of, “he seemed friendly.” Avoid affectation. If you read it aloud and it sounds clunky or awkward, it is. When words come naturally, you are using your voice.

If you have other ideas for finding the writer’s voice or can improve upon my suggestions, leave a comment.

This entry was posted on Sunday, March 4th, 2012 at 4:05 pm and tagged with beginning writers, fiction, non-fiction, Voice, Writer's voice, Writing, Writing advice and posted in On writing. You can follow any responses to this entry through the RSS 2.0 feed.
« Greetings from Eric J Baker
Tighten your writing »

7 responses to “Finding Your Writing Voice”